My article in today's American Thinker is called "Ted Cruz Was Right Again" is getting a lot of attention.


The usual suspects are attacking Ted Cruz for doing his job.

Republicans and a chorus of conservative commentators are dumping on the sole conservative Republican senator from Texas because – the horror! – he dared to force his Senate colleagues to publicly take sides on President Obama's shameful extralegal unilateral immigration amnesty.

Apologists for Republican cowardice claim to be upset with Cruz because, as they claim, his parliamentary maneuvers to stymie the amnesty somehow allowed some objectionable Obama nominees to move forward in the confirmation process.

Of course, they're lying.  All Obama nominees are objectionable – remember, our president is a red diaper baby – yet the Senate eventually caves to Obama on more or less all of them.  Any Senate that can confirm a full-on racist, pro-terrorist, America-hating, kooky, in-your-face Marxist like Tom Perez as labor secretary is going to give its blessing to just about anyone Obama sends over.  Who really cares if a few bureaucrats who will be approved anyway by the incoming Republican Senate in the new year get to work a few weeks or months early?

What really infuriates namby-pamby Republican senators is that Cruz forced them to take a public stand on the president's unilateral amnesty.  They know that the Republican Party base is mad as hell over the amnesty, and they don't feel the need to answer to mere hoi polloi.  Bought off by the crony capitalist lobby, they support amnesty but don't want to face the electoral consequences for their betrayal of the American people.  Just as Democrats don't want to get rid of poverty, Republicans in leadership don't want to stop the amnesty (or get rid of Obamacare, for that matter).  They need villains against which to rail.

Read more »
Posted by Matthew Vadum at 10:53 AM No comments: Links to this post 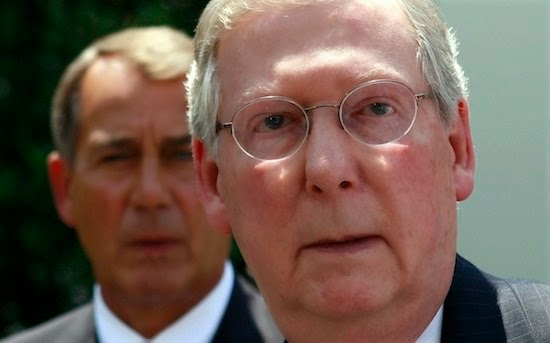 A mammoth spending bill aimed at preventing a repeat of the last government shutdown is coming under heavy fire from conservative groups for green-lighting President Obama’s executive immigration amnesty and continuing to fund Obamacare.

Republicans in Congress are inexplicably rushing through a catch-all $1 trillion-plus spending bill to prevent the government from running out of money at midnight tonight. The measure, which would keep the government funded through the end of the federal fiscal year (Sept. 30, 2015), is being called a cromnibus, which is a portmanteau of CR, as in continuing resolution, and omnibus, as in omnibus legislation.

The measure contains hundreds of policy provisions including a new prohibition on the legalization of marijuana in the District of Columbia and new funding to combat the Islamic State in Iraq and Syria (ISIS) and the Ebola virus in West Africa. It would continue funding two wildly unpopular Obama initiatives, Obamacare and President Obama’s extra-legal immigration amnesty. The Department of Homeland Security would be funded only for a few months, allowing lawmakers to delay a fight over amnesty until springtime.

“Importantly, the bill does nothing to block President Obama’s unilateral, unlawful actions which include granting quasi-legal status, work permits and Social Security numbers to those who are in the country illegally,” said Heritage Action for America spokesman Dan Holler.

“I suppose we shouldn’t be surprised that it’s taken the Republicans all of 35 days to drop that ball in spectacularly disappointing fashion,” Jenny Beth Martin, co-founder of Tea Party Patriots said in a statement.

“Make no mistake, this bill DOES fund Obama’s executive amnesty, and so much more.”

There is, of course, no reason for Republicans to pass in a frenzied rush an all-encompassing bill funding almost all of the federal government. They could easily draft a stopgap spending bill to carry them over to January when Republicans will control both chambers of Congress and have greater bargaining power in negotiations with President Obama.
Read more »
Posted by Matthew Vadum at 11:49 AM No comments: Links to this post

My article from the Dec. 4, 2014 issue of FrontPage magazine: 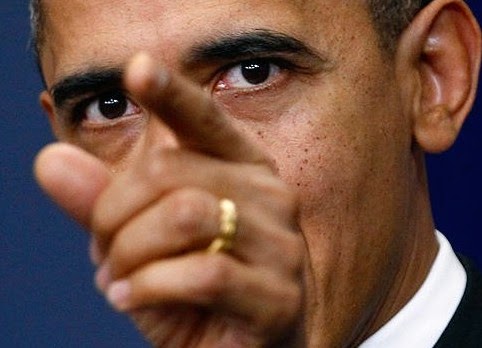 More proof has emerged that President Obama is using the IRS as a weapon against his perceived enemies as the administration abruptly canceled the release of 2,500 damning documents reportedly showing that the IRS illegally shared taxpayer files with the White House.

The existence of the documents is yet more proof that Obama maintains an extensive enemies’ list and that he treats the IRS as his personal plaything while he closely collaborates with senior IRS officials who have practically taken up residence with him in the White House. To Obama, the IRS is an instrument of political repression and taxpayer terror. Although it isn’t exactly breaking news that Obama is doing Machiavellian things with the IRS that the nearly-impeached President Nixon only fantasized about doing, hard documentary evidence of wrongdoing has been slow in coming.

The abortive document dump comes as former IRS mandarin Lois Lerner remains at liberty. Instead of becoming a long-term guest of the Bureau of Prisons, the unrepentant left-wing Democratic activist continues to live a life of luxury in Bethesda, Md., a fancy suburb of Washington, D.C. Despite the severity of her crimes, she doesn’t even have to wear a monitoring anklet. She hasn’t even been charged with breaking the law, an oversight that may be corrected by the incoming Republican-dominated Congress.

But now the Obama administration, which barely acknowledges the historic electoral whooping it received last month, has placed the 2,500 documents that are apparently not related to Lerner’s escapades in limbo as it hides behind privacy laws that are supposed to protect taxpayers, as opposed to corrupt government officials.
Read more »
Posted by Matthew Vadum at 11:35 AM No comments: Links to this post

My article from the Dec. 2, 2014 issue of FrontPage magazine:

A week after grand jurors in Ferguson, Mo., did their civic duty and resisted pressure from President Obama on down to lynch an innocent police officer, Al Sharpton and Ferguson riot leaders gathered at the White House yesterday to make plans to further exacerbate the racial tensions they created in order to cripple the economy and attack civil society.

These domestic subversives refuse to accept the official finding Nov. 24 that no probable cause existed to charge police officer Darren Wilson, who is white, in the Aug. 9 death of Michael Brown, who was black.

The finding of “no true bill” contradicts the Left’s preferred narrative that racist white cops are gunning down innocent blacks with impunity. The failure to indict Wilson, who has since resigned from the Ferguson police department, has driven left-wingers and racial grievance mongers into an exquisite state of apoplexy. They refuse to accept that the evidence considered by the grand jury overwhelmingly, indisputably demonstrated that Brown tried to seize Wilson’s gun in an attempt to do the officer harm. To put it more bluntly, there is proof that in their fateful 90-second encounter Brown tried to kill Wilson, even though the media has consistently identified Wilson as the aggressor.

But facts are rarely obstacles when left-wingers set their minds on something.

At the initial White House meeting of the Michael Brown truther brigade, Obama proceeded from the demonstrably false assumption that a tragic injustice was done to the late teenaged thug. The president said:

As I said last week in the wake of the grand jury decision, I think Ferguson laid bare a problem that is not unique to St. Louis or that area, and is not unique to our time, and that is a simmering distrust that exists between too many police departments and too many communities of color. The sense that in a country where one of our basic principles, perhaps the most important principle, is equality under the law, that too many individuals, particularly young people of color, do not feel as if they are being treated fairly.

To remedy this problem that was far less of a problem before Obama was inaugurated, the president announced he was appointing two left-wing establishment puppets to head a useless task force

Even though there is no evidence of wrongdoing on the part of Darren Wilson, police officers are going to receive stricter scrutiny. Obama also proposed spending $263 million to put body cameras on cops.
Read more »
Posted by Matthew Vadum at 11:29 AM No comments: Links to this post 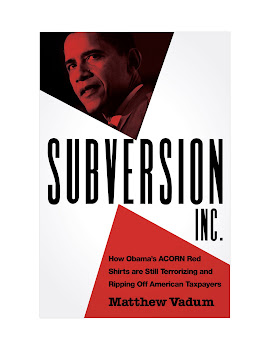 Matthew Vadum
An award-winning investigative journalist, Matthew Vadum is senior editor at Capital Research Center. His work is cited by Fox News, Weekly Standard, Wall Street Journal, USA Today, and many other media outlets. He's been on "The O'Reilly Factor," "CBS Evening News," "The Daily Show," and "The Colbert Report," and denounced by Al Sharpton, Oliver Stone, Roseanne Barr, and Keith Olbermann. Michelle Malkin hailed Vadum for having "the foresight and insight to report on the [ACORN] story when nobody else would." Glenn Beck said he finally "got it" when Vadum appeared on his Fox TV show to talk about ACORN, helping him draw one of his famous tree diagrams. Vadum "writes some of the harder edged and more influential briefings" in the conservative movement (Washington Post) and is a “conservative data hound" (Washington Independent). Vadum is also Adjunct Scholar at the James Madison Institute. His report galvanized opposition to liberals' campaign to force a kind of affirmative action onto private grant-makers in Florida. According to National Review, it convinced the Florida legislature in 2010 to pass SB0998 which outlawed the "ACORNization" of philanthropy in that state.